Article in the Spring 2011 edition of Gems & Jewellery, the magazine of The Gemmological Association of Great Britain.

On the 15 February a crowded audience of Gem-A Members and students listened to Ken Harrington talk about his craft and passion: gem cutting. Ken began his 50 years in the gem cutting trade as an apprentice to Charles Mathews Lapidaries, developing his expertise in ‘improving stones’ and cutting from rough. In his talk Ken covered various aspects of the traditional hand cutting of gems, how it differs from the modern, more mechanised cutting, and explained how the experienced coloured gemstone cutter can use his or her skills to improve stones during cutting, such as closing surface-reaching fissures.

Maximising value when cutting from rough or improving the appearance of a gem by skilful re-cutting can be done in two basic ways. The first is to polish a gem in such a way so as to physically or optically maximise its colour, clarity, or both. This can be done by cutting it to reorient it relative to its optical axes, by cutting to remove poorer coloured or included regions, or by cutting so that optically the colour or clarity appears better. For example, Ken explained how a sapphire with a localised concentration of blue colour in one region may be cut to appear fully blue, whereas if cut in another orientation it may look like a white sapphire. This was a skill long used by sapphire cutters in Sri Lanka. Ken described how he had recut a rather murky tanzanite to provide a most vividly coloured stone. The most startling example cited by Ken was an 18 carat ruby with an unattractive brownish tint that was unsalable at the asking price. He re-polished this and although reduced it to just 14 carats, it was now pigeon blood colour and eventually sold for considerably more than the previously asked price. As far as adjusting optics were concerned, Ken described how re-polishing an emerald to give it a slightly convex table facet, which he described as “tallow-cut” (an old term meaning cabochon), changed the path of light and the reflections in the stone so that four previously prominent dark specks under the table ‘disappeared’, much to the astonishment of the dealer who owned the stone. As these examples demonstrated, and as Ken repeatedly stressed, weight yield alone is not always the best criterion for cutting rough—a skilful cutter will aim to get the best-looking and thus most valuable stone from rough, not necessarily the largest. There were many cases, he said, where the well-planned and skilful cutting of one stone from a parcel of rough gems would pay for the entire parcel.

The second way in which a stone can be improved or repaired was by making use of what is known as the Beilby layer. This still much-debated effect was noted by the Scottish scientist George Beilby just over a century ago. Beilby noted that in metals a thin and seemingly amorphous layer was produced over the surface during polishing. Whether this layer was caused by liquid flow of the metal due to the heat generated in polishing or was some other form of transport remains uncertain. The presence of a similar layer generated on gemstones during polishing had also been postulated and this had generated controversy*. Nevertheless, a young Ken Harrington turned to Basil Anderson and Alec Farn at what was then the London Chamber of Commerce’s Diamond, Pearl and Precious Stone Laboratory for an explanation when he wanted to understand an effect he was making use of on a daily basis in his cutting—with a meticulously smooth lap (polishing wheel) and the right abrasive, he could make the surface of a gem flow, thus filling in surface-reaching fissures and even reshaping problematic things, such as damaged corners. Although theoretical gemmologists and scientists might express doubts about the nature or even existence of the Beilby layer in gems, Ken’s work demonstrated that it or something similar existed and could be exploited to create smooth, high gloss surfaces on gems. This probably relates to old literature on the polishing of sapphire and other corundum from Sri Lanka which says that tin oxide was the most effective polish, even though tin oxide is significantly softer than corundum-so the polishing must be by some form of surface flow rather than abrasion.

Ken gave several examples of his exploitation of the presumed Beilby layer for both crystalline and cryptocrystalline gem materials, from repairing a fissure right across the table of a fine ruby—he showed before and after photographs-to the production of thin, high gloss stone watch faces in the 1970s for English manufacturers such as Roy King. This repairing of gems had also been noted by other traditionally skilled gem cutters. Ken later commented that the owners of the gems he had ‘repaired’ sometimes complained that he must have swapped stones, although however generous a man he might be, removing a non-perfect stone and replacing with one of greater value seemed an unlikely act.

Ken’s talk was a perfect demonstration of the importance of hands-on craft skills and experience in gemmology, that practical workers had so much to tell theorists, and that modern hi-tech machine cutting does not necessarily produce the best yield from rough in either appearance or value terms. 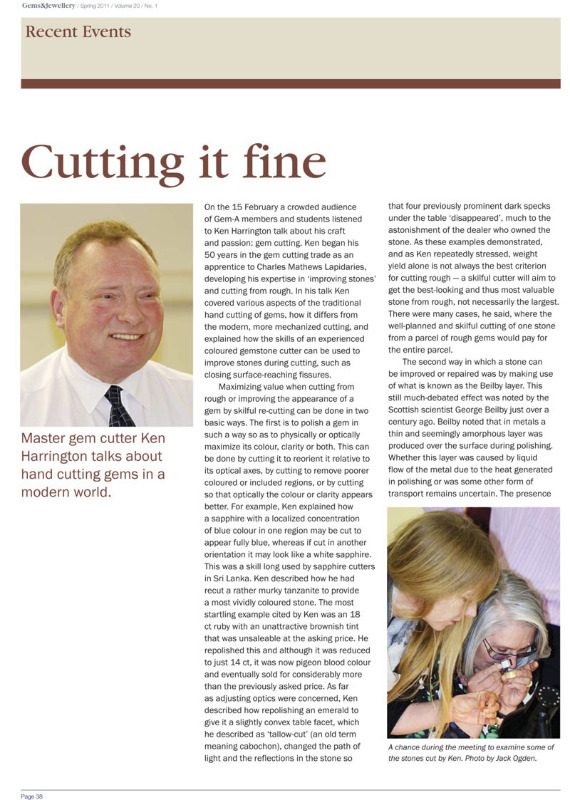 Article in the Spring 2012 edition of Gems & Jewellery, the magazine of The Gemmological Association of Great Britain.

Letitia Chaplin and Ken Harrington presented an interesting and engaging hands-on Gem Discovery Evening towards the end of May, involving a mystery stone.

Attendees were presented with a piece of matrix containing deposits of the mystery material, along with a small bag of what appeared to be gravel from a fish-tank—indeed, this was what it had been initially likened to by several dealers. When tested under various light sources, the mystery material changed from a bluish colour to a pinkish-red, suggesting a colour-change material, but one unlike any normally seen. It was revealed that this mystery material was in fact Brazilian alexandrite, a close relative of the well-known Russian alexandrite, but with a significantly different colour change.The Brazilian alexandrite, in its rough form, shows a noticeable colour change, but it is only when it has been cut to enhance its sparkle and lustre by an expert lapidary such as Ken Harrington (who cut all of the stones shown on the evening), that it truly comes into its own. Oval, round and square cuts were all on display, some with inclusions, but most without any discernible internal features, and with values that one could only guess at.

Alongside these were a selection of Russian alexandrites to show off their famous green to red colour change, as well as to highlight both their geological structure and the differences in colour between the two sources. If the chance arises to see this material at any point it shouldn't be missed.

Letitia and Ken's presentation was a delightfully new demonstration that encompassed all aspects of the ‘mystery stone’, from rough to faceted, and from the point of view of a gemmologist and a lapidary. 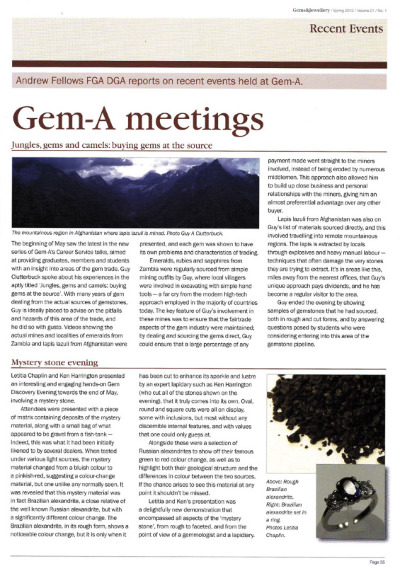